It’s been the word of the day for the last 3 years.

Will it be good? Will it be bad? Will the 15 year GDP forecasts end up being valid (they absolutely will not) where they show us declining into obscurity nearly?

No one really knows. It has just become entirely tribal and quite a sorry state of affairs where emotions overwhelm any valid argument – social media has become a cesspool for this kind of nonsense dichotomy, alongside the tabloids and, even worse, politicians have joined in, most recently with Vince Cable being utterly nonsensical.

Personally, however, I find the discussion surrounding financial services and Brexit to be the most nonsensical and ignorant argument that I think I’ve ever heard… and actually quite embarrassing.

In fact, I’d go as far to say that I am disappointed in the entire sector that the argument has progressed as far as it has. But there are reasons for that, which I’ll come onto later.

Let me be very clear; the City does not need a trade agreement with the EU for about 95% of the business it conducts.

The reason for this is very simple yet the nuance is not made whatsoever (which is why I find it so bizarre that the conversation is still going on).

In finance, you have retail business and wholesale business.

A retail client is pretty self-explanatory; it’s your everyday investor/participant in the financial markets.

You then have your professional client; these are either per se or elective. A per se professional is normally defined by a firm with two of the following criteria met:

A per se professional client tends to be an institution, company, etc.

An elective professional is someone that is eligible (correct expertise to conduct the activity and correct portfolio size) and that has explicitly requested in writing to be treated as a professional client.

The final client type is an Eligible Counterparty (ECP).

This tends to be a ‘too big to fail’ type firm – your Goldmans, Deutsche Banks, Barclays etc.

There is decreasing regulation with retail clients facing the most stringent, then professionals, then ECPs being pretty much totally exempt – and this is the kicker.

95% of City business is wholesale – that is, retail clients are totally excluded.

Let’s take an example where a City ECP might act as intermediary for a professional client wanting to buy shares on the DAX and how the EU has no say in the conducted business.

Exactly what is stopping another ECP from going and placing the client order through ECP 1 in the EU if ECP 2 is outside it? Well, absolutely nothing.

The same goes for UCITs funds.

If a fund manager sitting in London wants to issue a fund in Ireland or another EU state, nothing can stop him from doing som and UCITs funds are huge business, since they’re the main vehicle by which collective investments operate.

The EU’s whole schtick is that ‘we must abide by MiFID 2’ firstly forgetting that, well, London wrote the bloody thing, further demonstrating that we are leagues above them, and 2, that MiFID 2 only applies to retail business in the main.

And guess what? If an ECP wants to conduct retail/commercial banking business in the EU, all they have to do is set up a subsidiary in an EU state and abide by host regulations. This is why the quoted figures of thousands and thousands of City workers leaving is absolute rubbish – compliance and back office functions would maybe move as well as a small amount of front office functions, but even at that, it’s more likely that these roles will be tendered out to locals in Frankfurt or whichever outside-of-the-top-10 European financial hub they choose… and the total moves would probably amount to tens to hundreds from the big banks.

There will be problems with retail CFD and FX trading firms, who grab a CySec licence and passport into the UK and vice versa for FCA licensed firms in terms of accessing each other’s clients, but there is one big thing here – everyone knows FCA regulation is more valuable than CySec and offers far more client protection than CySec does… so really, it’s UK brokers that will benefit from the influx of clients from EU states in this segment, since there is actually nothing stopping them from choosing an FCA licensed broker.

What this comes down to is third country equivalence in the context of City business: this is defined here, by the EU themselves.

This is the key takeaway:

‘In some cases, the legislation includes a “third country regime” which allows non-EEA firms to provide services into the EEA if their home country regulatory regime is “equivalent” to EU standards.’

They speak specifically about risk weights, which in actual fact is defined by another London created directive, Basel III… which is globally abided by now.

In fact, if we look at a table from the link provided above, the EU says explicitly that wholesale business is exempt from any single market requirements when equivalence is granted… 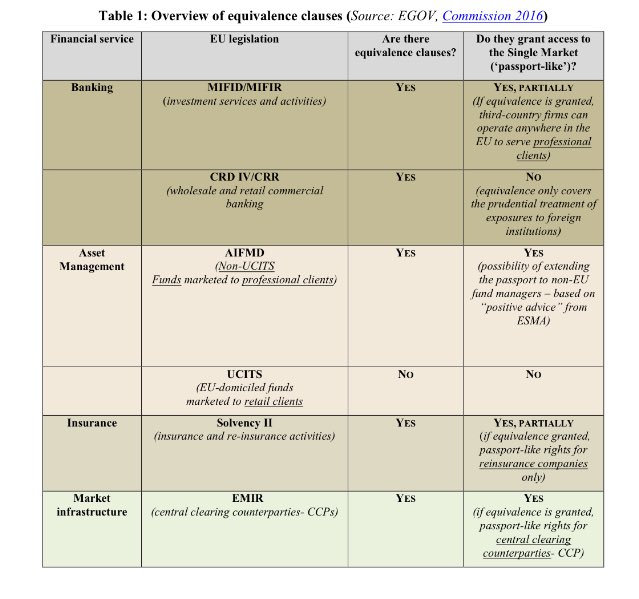 But why have we progressed this conversation so far, when it can be resolved and then be done with by looking at the top box in the table above?

The main reason is to do with the lobbying from big banks.

Think about it – why have all the big banks wanted to stay in the EU? To have the ‘other’ requirements of MiFID such as pre and post-trade reporting, which doesn’t affect who people can do business with, but does affect day to day operations.

Big banks can afford to interpret the 1.4 million paragraphs of MiFID 2 by hiring the compliance officers required & creating the relevant systems. Smaller banks can’t. It’s a simple monopoly grab and maintenance of the status quo where a select few banks dominate the intermediary market.

Lloyd Blankfein (CEO of Goldman Sachs) has been campaigning hard for the bank to move to Frankfurt post-Brexit, producing sound bites constantly bigging up Frankfurt and threatening a move.

Well, he seems to be leaving the firm next year… so much for that.

I’d really like to see our politicians show some balls and understand that the EU’s rhetoric is founded upon absolutely nothing. We really need them to stand up for the City – they speak so much about it being the pride of the country, but when the time comes, they shy away from any defence of it… and it’s not as if the defence requires reading between the lines.

Bio: David Belle began his trading career at the tender age of 17, after spotting a YouTube video for a trading platform and deciding to give it a try on a demo. In the years since then, he’s learned everything there is to know about the markets and how to trade them. He’s been successfully trading his own money for a number of years and has also spent time working in the city for a major broker.
You can find David on Twitter by clicking here
Davids website can be found by clicking here
Share on facebook
Share on twitter
Share on linkedin
PrevPrevious
NextNext