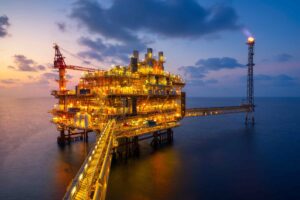 Cashed up, no debt and fully funded…so is the Orinduik Block just misunderstood by the Market?

The past 12 months have been something of a rollercoaster ride for Eco (Atlantic) Oil and Gas, listed on AIM (ECO.L) and the Toronto Stock Exchange (TSX-V)

Last August – to use the words of CEO Gil Holzman – was a ‘revolutionary moment’ for the Canada-based company, when it announced two significant oil discoveries at the Orinduik Block in the shallow water of the prospective Guyana-Suriname basin, off the north coast of South America. Drilling estimated that the Jethro-1 and Joe-1 exploration wells in the 1800 km2 licence may contain over 100 million barrels of oil in high quality sandstone Tertiary and Cretaceous horizons.

Eco is the smaller partner in the Orinduik joint venture, holding a 15% working interest with Tullow Oil (60%) and Total EP Guyana BV (25%). News of a rich new seam in what the United States Geological Survey ranks as the world’s second-most prospective and under-explored offshore basin, with untapped resources of 13.6 billion barrels of oil and 32 trillion cubic feet of natural gas, propelled the small-cap’s share price from levels of just under 70p at the beginning of August to around 170p a month later.

But that early euphoria was short lived. In early November Tullow published the results of an initial analysis of the discovery’s oil quality which failed to meet the market’s soaring expectations, finding heavy crudes with a high sulphur content rather than the light, sweet crudes preferred by refiners. Eco’s share price was dragged down with Tullow’s, tumbling to around 55p within a couple of weeks. In the wake of pandemic the price has fallen further, to its current level of just under 20p.

A year on from the discovery, and with the industry adjusting to a Covid-19-era new normal, it is perhaps time to put Eco’s prospects into perspective – and conclude that the market’s response to Tullow’s analysis was perhaps an over reaction.

Put simply, whatever the precise composition of the oil found at Orinduik, this looks like a big find in highly prospective territory: the licence is adjacent and updip to ExxonMobil’s 13 discoveries on the Stabroek Block where recoverable resources are estimated to be over six billion barrels of oil. Eco makes the plausible case that Orinduik crude is not dissimilar to the commercial heavy crudes in Exxon’s nearby Hammerhead discovery, and similar to those currently in production in the North Sea, Gulf of Mexico, the Campos Basin in Brazil, Venezuela and Angola. Analysis to date suggests that while the crudes are deemed to be heavy, the oil is mobile, located in high quality porous sand accessible to horizontal drilling.

In February Eco was able to upgrade its Competent Person’s Report to reflect a significant increase in Gross Prospective Resources to 5,141 MMBoe (with 771 MMBoe net to Eco), up from a previous estimate of Gross Prospective Resources of 3,981 MMBoe in March 2019. The Orinduik Block has 22 prospects, with 11 leads in the Upper Cretaceous horizon, with the majority of the leads having a 30pc or better chance of success.

Eco and its joint venture partners are currently preparing geological models to pinpoint Orinduik’s highest value targets. Their analysis has been complicated somewhat by the recent discovery of light oil in the Carapa-1 well on the Kanuku Block to the south of Orinduik. Eco says that the need to integrate the implications of this new data into their research means that the next round of drilling, originally scheduled for later this year, will likely take place in H1 2021. A decision will be announced in ‘the next few months’. Eco is fully funded for its share of the cost of appraisal work at Orinduik: the company’s annual results, published earlier this month, stated that as at 31 March, the Eco had cash of US$18,782,196 with zero debt.

Although Eco’s news over the past year has been dominated by its Guyana prospects, the company’s interests off the coast of Namibia, to the south west of Africa, are also worth noting.

Eco is the majority stakeholder and operator of four Namibian licence blocks spanning 23,000 km2 across the Walvis Basin, estimated to hold some 25 billion barrels of prospective resources. Like Guyana-Suriname, the Namibian coast has attracted increasing attention from exploration companies over the past few years: Eco has established partnerships in the region with NAMCOR, AziNam, ONGC Videsh and Spectrum Geo Ltd.

Peering through the mist

It has been hard for the market to put Eco’s prospects into proper focus, with the unexpected Guyana discovery being followed by confusion about the quality of its resources, and then the chilling effect of the pandemic on the global oil and gas industry.

But as the mist begins to clear it is possible to discern a company with solid fundamentals: the tangible possibility of success in Guyana, a set of promising resources off the Namibian coast, and a plenty of cash in the bank. With a share price orders of magnitude below its level just a few short months ago, Eco (Atlantic) is well worth returning to.

To view the latest Berenberg research note with a £1.45 price target click here

The WTI market has gapped a little bit lower during the trading session last week to hang about the 200 day EMA. However, the Tuesday candlestick which was so bullish tells us that we are more likely than not to turn around and rally. If we can break above the highs from last Tuesday, then it is very likely that we go looking towards the $49 level via the $45 level above. The $40 level underneath continues to be massive support, an area that has been rather supportive of the last couple of weeks. The 50 day EMA underneath is even more supportive, so this looks like a “buy on the dips” type of scenario…

The author was paid for this article but does not hold shares in the company.