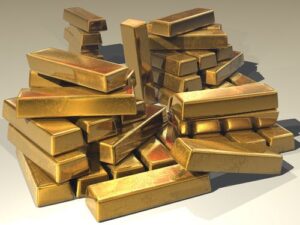 “Although Gold is not by nature money, money is by nature Gold” – Karl Marx

As the price of gold continues its longest run since 2011, closing above the previous record intraday high of $1,923 set in September that year, we look at Ten small cap gold miners that look set up for a golden run…

Anglo Asian Mining (AIM:AAZ) and Conroy Gold and Natural Resources (LON:CGNR) announced an eye-catching joint venture in July, focused on the Longford Down Massif gold district in the north-east of the island of Ireland.

Under the terms of the agreement Anglo Asian will fund the development of licences – currently owned by Conroy Gold – encompassing Clontibret in County Monaghan (which has a JORC resource of more than 500,000 ounces of gold), the Clay Lake gold target in County Armagh, and exploration targets with potential for another 8.8m ounces.

Anglo Asian will acquire a 25pc working interest by spending €4m to fund the first stage of exploration, and up to 55pc through further work to develop the Clontibret gold deposit to mine construction-ready status.

Conroy Gold has interests not included in the joint venture: one other licence in Ireland and eight gold exploration licences in Finland’s Lapland gold belt, host to Europe’s largest gold mine.

Anglo Asian has a portfolio of gold, copper and silver exploration and production assets in Azerbaijan covering 1,062 square kilometres across one of the world’s significant gold and copper bearing trends, the Tethyan Tectonic Belt.

Since the news of the joint venture Conroy’s share price has doubled to around 20p, and Anglo Asian’s has risen to around 150p.

The share price of Chesterfield Resources (LON:CHF) has soared this summer as the company has made significant progress towards realising the potential of its licence covering the Troodos Mountain range forming the spine of the island of Cyprus.

This year Chesterfield published the results of a desktop evaluation indicating the presence of a VMS belt capable of producing a clean gold-rich copper concentrate. Percussion drilling undertaken in the past few months has indicated the presence of gold, zinc and copper deposits at several holes across the licence.

The promising results were followed last month by news of a £630,000 placing that will provide funding for ‘a comprehensive diamond drill programme this year’. The company has re-commenced its percussion drilling campaign, the final step of test work prior to diamond drilling.

The consistent news flow has propelled Chesterfield’s share price from 1.75p in April to around 7.5p today.

Cobra Resources (LON:COBR) has been busy over the past 18 months transforming itself from a cash shell into an operating business, building a portfolio of interests in Australia as a basis for sustainable mining operations.

The company has acquired two significant assets, including an option over a 211,000 oz gold resource.

The Prince Alfred Copper Mine is a formerly producing copper mine, and the six large tenements it has acquired near Wudinna in South Australia have mineral deposits totalling 4.43 million tonnes at 1.5g/t gold for 211,000 ounces using a 0.5g/t gold cut-off grade.

Cobra has completed first stage soil sampling at Wudinna, establishing key pathfinder elements to mineralisation. It is engaged in second stage sampling to generate new target areas, and is planning third stage analysis to finalise priority targets, in preparation for a drilling programme during the second half of 2020.

The company’s share price is currently hovering around 1.95p.

ECR Minerals (LON:ECR) is seeking to capitalise on the surge of interest in gold exploration in Victoria, Australia, with its ownership of two gold projects in the region.

Finance is a challenge. The company’s Australian operations subsidiary has cumulative tax losses estimated at A$66m from past trading, which ECR expects ‘to be available for offset against any taxable profits made in future’.

ECR has been raising funds. This January its Australian subsidiary received a research and development expenditure refund of A$555,212 from the Australian government. ECR completed the sale of its Argentine subsidiary Ochre Mining SA in February and retains a royalty of up to 2% to a maximum of US$2.7m in respect of future production from the project. In April company sold licences comprising the Avoca, Moormbool and Timor gold exploration projects in Victoria, Australia for A$2.5m.

ECR says interest from third parties in its Victoria project is strong, with several discussions taking place in respect of potential commercial transactions over Bailieston and Creswick.

The company also has a 25% interest in the Danglay epithermal gold project, an advanced exploration project located in a prolific gold and copper mining district in the north of the Philippines

ECR’s share price is on the rise, doubling to 2.10p since the beginning of July.

Great Western Mining (AIM:GWMO) is one contemporary prospector hoping riches are still tucked away in the historic gold mines of Nevada.

The Irish-based company, which has 100pc interests in six concession areas in the state’s aptly-named Mineral County, has long been focused on copper, establishing over the past five years a Mineral Resource of 4.3 million tonnes of 0.45pc copper.

Encouraged by the ongoing surge in gold prices, Great Western is recalibrating towards gold and silver. The company’s new mantra is ‘short term gold and silver deposits’, and ‘long-term, world-class copper deposits’. Late last year Great Western raised new capital to investigate the gold and silver potential of its assets, and collected multiple soil samples at two properties, the evocatively-named Mineral Jackpot group of abandoned mines, and the Rock House exploration play. The company has reported that subsequent lab analysis of the soil sampling has virtually doubled the footprint for gold extraction at both locations.

In April regulators gave the green-light for surface disturbance works at Mineral Jackpot and Rock House. A month later Great Western entered into an option agreement with Ely Gold Royalties Inc to acquire the ‘Olympic Gold Project’, a collection of 48 mineral claims in the state. And in July a progress report on surface sample assays from the Project produced positive results, indicating up to 21.50 ppm Au and 37.30 ppm Ag in surface dumps and stope material.

Great Western, whose share price is currently around 0.12p, will report on further analysis of the Olympic Gold property later this year, and is gearing up to progress work at Mineral Jackpot and Rock House delayed by the pandemic.

Gunsynd (AIM:GUN), a company holding a cluster of investments the natural resources, life sciences and beverage sectors, has increased its mining portfolio over the summer.

The UK-based company has stakes in two companies with nickel prospecting licences in the Solomon Islands: an 18.22pc interest in Sunshine Minerals, which holds the Jejevo licence; and a 7.67pc stake in KNSI, which owns the PL05/19 licence over the Kolosori Prospect.

This June Gunsynd took a 28.4pc interest in Rincon Resources, a Western Australian (WA) focused gold and base metals exploration company. Rincon holds the rights to three prospective gold and base metals projects in WA, with a primary focus on the South Telfer Project, covering 50,000-hectares in the Paterson province.

The Paterson region is fast becoming one of the most popular gold regions in Australia, with Newcrest Mining (ASX: NCM) and Greatland Gold PLC (AIM: GGP) enjoying recent exploration successes. Rincon’s South Telfer interest is 12km south of Newcrest Limited’s Telfer mine. Rincon’s has two other prospective gold and base metals projects at Laverton and Kiwirrkurra.

Gunsynd, whose share price is hovering just under 1p, has undertaken a series of placings over the past year to boost its investment fund by some £900,000.

Katoro Gold (LON:KAT) has been working to secure funding for gold projects located in the Lake Victoria Goldfields region of northern Tanzania.

A scoping study at the Blyvoor project attracted interest from more than a dozen possible funders, leading to a July announcement that joint venture partners had been secured. The partners are currently refining a strategy and associated deadlines for securing project financing by 30 September this year to fund the construction and commissioning of a beneficiation plant and auxiliary operations.

The company has been busy raising funding towards the venture, a June placing brining in £1.1m, and the sale of another Lake Victoria licence, Imweru, brining in another US$1m.

Katoro is also seeking earn-in, joint venture or similar partners for its part-owned Haneti licence, which comprises tenements prospective for nickel, platinum-group-elements and gold. While discussions continue the company will work to enhance the intrinsic value of the project through further exploration, and will implement an exploration drill programme over the Haneti’s existing drill ready targets.

Katoro’s share price is floating around the 2p mark.

Panther Metals (LSE:PALM) has excited interest this year with its rapid expansion of two gold and metals projects in Canada and Australia.

Panther continues to analyse the data to allow the company to define a diamond drilling programme and associated bedrock trenching, which will in turn lead to the publication of formal Mineral Resource Estimates.

Panther raised £823,000 when it moved from the NEX market to the LSE this January, enough to fund its current exploration programme and allow evaluation of other acquisition opportunities. The Australian licences were paid for in shares when the company was admitted to the LSE.

Panther is fully-funded for the rest of this year, but is clear that the company will need a further cash injection to fund further exploration of any opportunities its current programme uncovers.

As the news has rolled in the company’s share price has risen from 2p at the beginning of April to just under 8p.

Power Metal Resources (LON: POW) has a diverse portfolio of projects across several jurisdictions including Australia, Botswana, Cameroon, The Democratic Republic of the Congo and Tanzania, focused on exploration for cobalt, copper, gold, lithium, nickel and palladium metals (PGM).

In July the company completed a placing to raise £1m to support strategic expansion of exploration activities and commercialisation across its interests, in pursuit of a major discovery.

In July Power Metal acquired an option to earn in to a 75pc interest in the Alamo Gold Project, a package of gold mining claims in west central Arizona, a region also prospective for silver, lead, zinc and copper. Exploration work will start ‘soon’.

Alamo is the newest addition to the company’s international set of interests.

Power Metal has several interests in Africa. Its subsidiary Cobalt Blue Holdings is exploring prospective nickel and cobalt assets in Cameroon. The company has a 70pc interest in the Kisinka Project, seeking copper and cobalt in The Democratic Republic of the Congo (DRC). And the company has a share in the Haneti Nickel Project in Tanzania along with Katoro Gold, profiled above.

As Power Metal has expanded its range of interest the company’s share price has risen, climbing from 0.33p at the start of the year to just under 1p.

Below, David Rosenberg, Rosenberg Research chief economist, joins ‘Closing Bell’ on CNBC to discuss what the levels of gold and silver mean for the U.S. economy…

The author was paid for this article but does not hold shares in any of the above mentioned shares.